An audio presentation of The Objective Exercise is also available, but cannot be purchased unless you first purchase the PDF download of “Gurdjieff: Cosmic Secrets – The Teaching Guide”, or if you have personally attended an Inner Journey with Russell A. Smith. In this way, current and past students can listen to, and be guided through, the Objective Exercise anytime they wish.

The audio presentation of the Objective Exercise has been made into an interactive online course, and once purchased, requires you to Login first. If you have purchased Gurdjieff: Cosmic Secrets – The Teaching Guide, or are a current student of Russell A. Smith, please click “Login” on the menu bar.

From Pythagoras, to Plato, to Ptolemy, to Newton, to Gurdjieff, to Ouspensky, to Smith, to this.

It became clear that true knowledge of reality was once known fully, but has been held “underground” throughout history, and fragmented and taken literally at the surface. Real data was gathered throughout time, captured, refined and replicated. Eventually, Gurdjieff exhumed this truth, and unified the three lower ways of the Fakir, the Monk, and the Yogi, into a single way – “The Fourth Way”.

However, despite being very close, Gurdjieff was not able to impart this clearly to all. He buried it deeply in his works. He imparted clear clues as to the direction he was facing, and left a good compass, but the needle wobbled too much when people got near the goal. He could not wake others up as he wished, because all ways, including the Fourth Way of Gurdjieff was subjective.

You cannot pass on a subjective way. It is uniquely personal to the seeker of truth.

Russell A. Smith then came along, out of nowhere; which is precisely what Gurdjieff was fishing for with release of his books. Sooner or later, hopefully, someone would see enough truth in what he alluded to, to develop and combine the parts, and thus finally, complete the picture on the box.

All Previous Ways to Awaken have been Subjective

The gaps were filled, the picture made, and it became obvious that the resultant structure fitted not only everything Gurdjieff hinted to, but also matched perfectly many religious, scientific, and spiritual beliefs and theories. Gradually but assuredly, Smith became convinced that the structure he had found was correct, and it clearly was. Do not take our word for it though – verify it all for yourself. It is mathematical, and numbers are the backbone of truth, equality and justice.

Gurdjieff: Cosmic Secrets was written to encapsulate the very tzimuss of this structure, and gave many examples to corroborate. From that very structure, an exercise was embedded. Russell Smith, having immersed himself for decades in this work, realised that all ways to awaken, including his own, were subjective.

No matter how much work others did that followed him, they could not wake up the way that he and many others did before him, which was through sheer personal determination, effort, sacrifice, dedication, and subjective CHANCE. We needed an objective way – one that would work for all.

Russell saw the injustice of this, and cried out – “Give me an objective way!”. Fortunately, he had studied the rules and laws of reality, and his mind was able to discern and impart a simple, yet patently obvious, once seen, exercise to achieve awakening objectively, which contained a great secret and a great truth.

This exercise is a way to objectively awaken, using knowledge of the laws of world creation and world maintenance, a cleansing of the falsities built up in us from years of subjective living. It develops “Being”, making us primed and ready to open our minds to higher centers – to conscience, reason, and impartiality. A state that is the given right of every human being on this planet, if only they knew, and knew how.

From centuries of study, here now, is everything you need to know to awaken.

A revelation of a great secret and great truth.

This is more than just an exercise. It is a sequence to awakening, and comprises five main parts:

To fully understand this, and to become fully prepared, you will need to undertake a complete Inner Journey, that usually takes a solid and complete eight days. The full dialogue of this journey is encapsulated within a single downloadable book called “Gurdjieff: Cosmic Secrets – The Teaching Guide”. The Objective Exercise is given free as part of that book; a book that builds a picture of objective truth, from which you can easily see why we fell asleep, and what we need to do to reclaim our natural state of awakening. Sleep is why the world is in the state it is in. Chaos, lies, and falsity shout a thousand times louder; and, more often than truth – they have to, otherwise a child could see through the facade.

These are not just bold claims, they are open for anyone to prove and verify for themselves. We have simply made it available to all.

Gurdjieff buried this knowledge deeply, and made others work hard to find even just fragments of it. He did not want it be found superficially, nor have us “wait with our mouths open, waiting for a roast pigeon to fly in”. However, in this century of our existence, we are so steeped in subjective falsity, selfishness, prejudice, unnecessary stresses, and utter feelings of separation from the whole, that what was buried deep has to be brought right to the surface, so that a pigeon banquet is now laid out before you. Feast yourself… 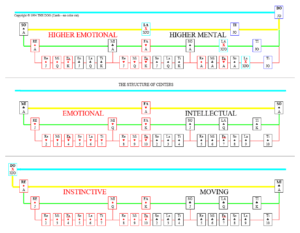