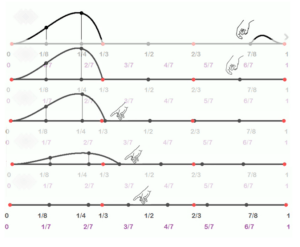 This page contains animated versions of some of the models described in Gurdjieff: Cosmic Secrets The TEACHING GUIDE.

The Changing of the Law of Seven from Sevenths to Diatonic

“These changes in the functioning of the sacred Heptaparaparshinokh consisted in this, that in three of its Stopinders HE altered the, what are called ‘subjective actions’ which had been until then in the Stopinders, in this respect, that in one HE lengthened the law conformable successiveness; shortened it in another; and in a third, disharmonized it…”

From the Big Bang to the Diatonic Enneagram

“…And, namely, with the purpose of providing the ‘requisite inherency’ for receiving, for its functioning, the automatic affluence of all forces which were near, HE lengthened the Stopinder between its third and fourth deflections.”